My digest and review of the book.

Of the books I have read, Release It! is the one I would require all "senior" developers to read (together with something like Architecting Enterprise Solutions: Patterns for High-Capability Internet-based Systems). Especially the first part on stability with its patterns and anti-patterns is a must read. Without knowing and applying them, we create systems that react to problems like a dry savannah to a burning match. I found also to next to last chapter, #17 Transparency, very valuable, especially the metrics and design of the OpsDB and observation practices.

One thing I have left out of the digest which is really worth reading are the war stories that introduce each section, they are really interesting, inspiring, and educational. 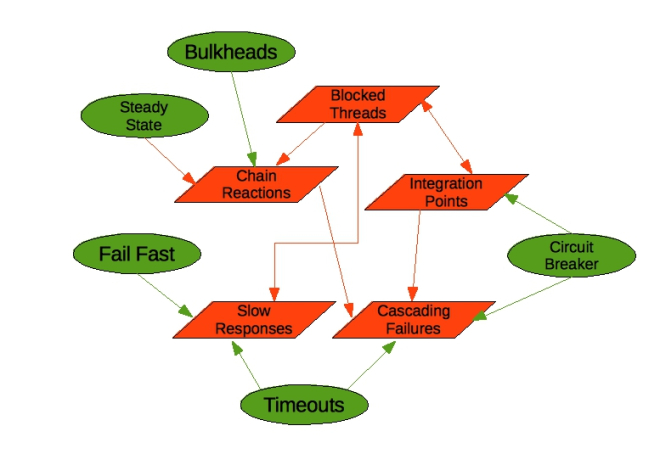 Load-balanced application with a defect (typically resource leak or load-related crash). If the defect is triggered in one instance and it fails, the remaining ones are the more likely to fail (increased load, ...). Bulkheads can help by splitting nodes into separate sets with separate, smaller chain reactions occuring hopefully at different times. Can lead to a cascading failure in a calling layer.

Ex.: An email from marketing to a selected user group with a special deal – which they will share further and suddenly the page if flooded by users. All servers waiting to acquire a lock to update the same, popular item (=> prefer shared-nothing architecture or at least apply decoupling middleware or make the shared resource itself horizontally scalable through redundancy and a synchronization protocol).

Something that worked in small scale leads to problem when the system is scaled up. Whenever we have a many-to-one or many-to-few relationship, we might run into problems when the “more” side increases, f.ex. the DB may crash when going from 2 AS – 1 DB to 10 AS – 1 DB. A common problem is point-to-point communication.

U.C. is a special case of Scaling Effects: one side of a relationship scales up much more than the other side. Ex.: Many web servers that typically serve mostly static content and only few dynamic pages provided by back-end servers; if the traffic pattern (workload) suddenly changes, i.e. many users coming to the dynamic functionality, the front-end servers will flood the few back-end ones. It might be impractical to match their capacities for rare spikes so build them both to be resilient in the face of a tsunami of requests. For the front-end, Circuit Breaker will help by relieving the pressure on the back-end when responses get slow or connections get refused. For the back-end, use Handshaking to inform the front-end to throttle back on the requests. Also consider Bulkheads to reserve capacity on the back-end for other transaction types.

Generating a slow response is worse than refusing a connection or returning and error as it ties up resources in both caller and callee. They usually result from excessive demand or due to an underlying problem, f.ex. memory leaks and the resulting garbage collection, network congestion.

SLA Inversion = a system that must meet a high-availability SLA depends on systems of lower availability. But the best SLA you can provide is the one of your dependency with the worst SLA.

Solution: 1) Decouple from the lower SLA systems so that your app can continue functioning without them, degrade gracefully. Decoupling middleware is excellent for this. At least employ circuit breakers to protect from your dependencies. 2) Determine a realistic SLA and, instead of the whole system, focus on the availability of specific functions/features w.r.t. their dependencies.

"Design with skepticism, and you will achieve. Ask, 'What can system X do to hurt me?' and then design a way to dodge, duck, dip, dive, and dodge whatever wrench your supposed ally throws." p95 One of those systems is your DB - what if it suddenly returns 5M rows instead of the usual hundreds?

Rarely you want to wait forever (or many minutes).

A Circuit Breaker wraps an Integration Point and works like a fuse, "melting" (opening) when a number of calls to the system fail or time out in a row, thus making subsequent request fail fast without consuming too much resources and easying load on the remote systems. Occassionally it lets a call through to check whether the system hasn't become responsive again.

It works great with graceful degradation, i.e. offering limited yet still useful functionality to users when a subsystem becomes unavailable.

Bulkheads are water-tight compartments in a ship; when there is a hole, water floods only one compartment, saving the ship from sinking. Similarly you may partition your resources (servers etc.) and assign the partitions to particular clients/functions so that a failure doesn't affect all and/or more important functionality/clients are protected from failures triggered by less important ones. Physical redundancy is the most common form, protecting from HW failures. A small-scale example is binding a process to only a subset of CPUs. Inside of a process, you might create separate thread groups dedicated to different functions - f.ex. separate request-handling thread pool for administrative functionality. Ex.: A failure in flight status functionality won't stop check-in from working.

For every mechanism that accumulates a resource (data in a DB, log files, memory consumed by a cache), some other mechanism must recycle that resource.

If a system can determine in advance that it will fail in an operation, it's better to fail fast.

A test harness emulates the remote system of an Integration Point and can simulate many errors (network, protocol, application-level) to test most/all of the failure modes. "A good test harness should be devious. It should be as nasty and vicious are real-world system will be." [126] "The test harness should act like a little hacker, trying all kinds of bad behavior to break callers." [128]

A well-done middleware integrates (by passing data and events) and decouples (by hiding specific knowledge, calls to other systems) systems.

Quiz - what is wrong here:

User sessions are the Achilles heel - they consume memory, and, if replication enabled, CPU and bandwidth.

Load testing: real world isn't polite to the site. Search engine spiders may ignore cookies create a new session on each request (while generating many requests). Scrapers and shopbots do the same.

"Used well, [DB] connection pools, like all resource pools, can improve capacity by improving throughput. Left untended, however, resource pools can quickly become the biggest bottleneck in an application." [167] - when there is contention for the resource , i.e. less than needed available; the requesting thread is then blocked indefinitely. Also, each connection - even whine idle - consumes resources on the remote system.

Ajax = many more requests coming from the browser to the server, more rapidly. The req and resp will typically be smaller. Used poorly, it will place more burden on the web an app servers.

Session thrashing - ensure session affinity so AJAX req go to the server having the user's session. Make sure you don't create a new session for each req.

How long a session stays in mem after the last req (as we have now way of knowing the user went away for good) - defaul(ed) to 30min in Java. Look at your data to determine session timeout: e.g. avg + 1 std dev. In practice it will be ~ 10 min for a retail site, 5 min for a media gateway, up to 25 for travel-industry sites. Even better is to make sessions unnecessary. F.ex. in-mem copy of persistent data may be dropped and recreated at any time (keep keys, not whole objects).

If the site is slow, users may start hitting Reload in hope of getting a presumabely stuck response, thus increasing the load even more. (The app server doesn't know it should stop processing the previous one.) Make your site fast so that users never think of doing this.

ORM => predictable, repetitive SQL. Predictable access patterns of SQL are good for capacity, b/c a competent DBA can tune the DB for them. OO developers suck at relational queries and create expensive queries inconsistent with the tuning for the rest of the app.

Common problems: joins on non-indexed columns, joining too many tables, .. .

=> minimize, check with a DBA, verify gains against real data.

Use & remember to protect callers from blocking forever. Size them for max throughput.

Not everything needs to be dynamic and even not all the dynamic stuff changes equally often.

"In Java applications, garbage collection tuning is the quickest, and easiest way to see some capacity improvements. An untuned application running at production volumes and traffic will probably spend 10% of its time collecting garbage. That should be reduced to 2% or less." [205] (Remember this was written in 2007.)

Keeps app separated if sep. in prod to prevent hidden dependencies. Zero, One, Many - if having many nodes in prod, have 2 in QA. Just buy the gear: "I've seen hours of downtime result from presence of firewalls or load balancers in production that did not exist in QA." [238]

Build a clear start-up sequence into the app so that everything starts in the right order and must complete before requests are served. Init. at least some conn for each conn. pool (Fail Fast).

Clean shutdown: have a mode where existing tx are completed (remember a timeout) but new request not accepted.

Start early. You need visibility into the whole system to avoid local optimization.

Logging & monitoring expose the immediate behavior/status but unsuitable for the historical/future perspective => accumulate status, metrics in a (ops) DB.

Expectation = an allowed range for a metric, a time frame in which an event must [not] occur, an allowed status; violation => alert. Set based on historical data. (Beware false positives = crying the wolf!). Eventually the expectation values may become functions of the business rhythm (day/night, special seasons, ...)

Watch for both trends and outliers. Include continuous improvement.

For each metric being reviewed: How does it compare to the historical norms? If the trend continues, what happens to the correlated metric (# users x responsiveness); how long can it continue before hitting a limiting factor and what will happen then? => interpretation & decisions