June 28, 2013
John Hughes and Stuart Halloway had very interesting talks about random testing at NDC Oslo, a topic I have been ignorant of but want to explore more now. Contrary to the typical example-based unit tests where the developer specifies inputs, interactions, and specific validations, random testing generates random input data and/or sequences of interactions and the verification is based on more general checks. Random testing can check many more cases than a developer would ever write and cases that a human would never think of. It can thus discover defects impossible to find by the traditional testing, as has been demonstrated f.ex. on Riak.

Random testing typically starts by creating (likely a very simplified) model of the system under test. The model is then used to generate the random data inputs and/or sequences of actions (method calls). Then the tests are executed and their input and output data captured. Finally the results are validated, either against predefined "system properties," i.e. invariants that should always hold true, or manually by the developer.

Disclaimer: My knowledge of random testing and the tools described below is still quite shallow so there are likely to be inaccuracies, if not mistakes. Corrections are highly welcomed.

John Hughes, one of the key people behind Haskell, created the famous Haskell testing library QuickCheck in 1999. He has later founded a commercial company QuviQ that uses an Erlang version of QuickCheck to test critical systems, such as those in cars, written in Erlang, C, or other supported languages.

If we wanted to test an implementation of a stack, we would:

According to Hughes, already surprisingly simple models can discover a number of defects. For example in the case of the key-value store Riak, which is nowadays perhaps one of the best tested databases thanks to QuviQ, a failing corner case was found using only a single key and few concurrent clients.

Randomly generated operation sequences can discover corner cases that a human would never think of, as demonstrated on the slide below, where the sequence "open file - close file - open file - lookup - insert - insert" seems to be OK but renders the file invalid, throwing premature eof upon next access. 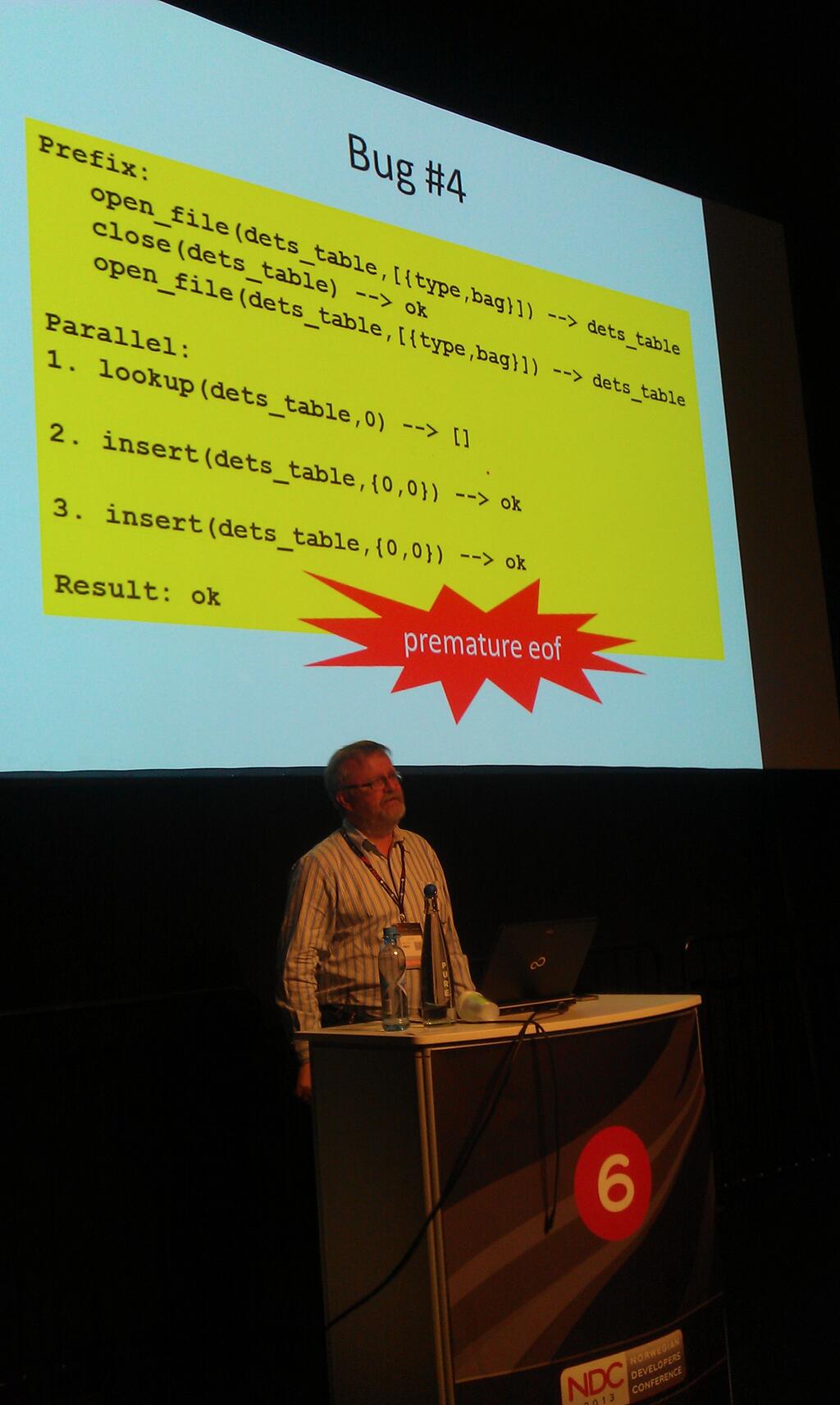 QuivQ has successfully used QuickCheck f.ex. to check embedded software in Volvo cars, to track notorious race conditions in Erlang's built-in database (the dets slide above), to improve Riak and in many other cases.

QuickCheck has been ported to many other languages - there is f.ex. ClojureCheck, ScalaCheck, Quickcheck for Java. See also introduction into Haskell QuickCheck2.

Note: The Certifying your car with Erlang introduces QuickCheck a little more and than describes its application to testing car software stacks and components from different vendors and their conformance to a standard (found 200+ bugs in the implementations and 100+ ambiguities in the standard and thus different implementations, with relatively little code). Also introduces mocking (to test components in isolation) and testing of clusters of components.

Simulant is a Clojure library for simulation testing based on a probabilistic model, developed by Stuart Halloway. All inputs, outputs, runtime and other information is stored in a database and it is thus possible to compare runs in different times and even to perform new validations on old data.

Using Simulant involves the following steps, demonstrated on the example of a simple system of traders:

In a typical system you would have more than one agents (i.e. different user profiles - frequent trader, small trader, big trader, ...) and more actions and more randomness (different start balances, trades could depend on a probability function changing in time etc.)

The fact that everything is recorded in a DB makes it possible to for example go later back and compare execution performance of the trade function over time.

Randoop is a java tool that "randomly, but smartly, generates sequences of methods and constructor invocations for the classes under test, and uses the sequences to create [JUnit] tests." It "uses feedback obtained from executing the sequence as it is being constructed, in order to guide the search toward sequences that yield new and legal object states. Inputs that create redundant or illegal states are never extended; this has the effect of pruning the search space." The paper Feedback-directed random test generation (2007) describes both the principles behind Randoop and also results from using it and its .NET sibling for testing of 14 widely-deployed, well-tested Java and .NET libraries totaling 780KLOC and a comparison to other types of random testing, f.ex. JPF.

NASA's Java Path Finder (JPF) - "JPF is a highly customizable execution environment for verification of Java™ bytecode programs." Essentially, as far as I understand it, JPF provides a special JVM running on top of normal JVM, that collects additional information about the executing program and modifies its execution, for example by executing all - instead of just one - branches of the code, to make it possible to check them all. It is very flexible and supports different execution modes and heuristics for what to skip. Read What is JPF? and Testing vs. Model Checking. (Model checking, contrary to testing, is a "method that exhaustively explores all possible SUT behaviors" - at least in theory. In practice the state space is too large and must be pruned, leading to blanding of the two.)

Random testing is a very powerful and irreplacable technique and we will hopefully see its increased application. There are many approches targetting different situation and trying to deal with the problem of an effective selection of inputs from an impractically large input space. It is worth starting to explore them now.